As I mentioned before I had wanted an iPhone for a while but it wasn’t accessible enough for me until recently.  Once they allowed a bluetooth keyboard to connect to help me with texting and setting up Proloquo2go on it my next biggest issue was keeping grip of it and keeping hands steady enough to use it.

I looked at a few cases the older iMainGo2 which is battery operated and the iHome case,  also battery operated.  My main difficulty with these would be getting the batteries in and out, and if I was going to be using this as a communication aid on a regular/daily basis this would then become a frustrating daily event.

So I decided to plump for the latest iMainGo case with rechargeable battery. I’d like to also quickly say here a Thank You to ‘Therapy Box’ who sent me a free US to UK adapter plug and a lanyard. 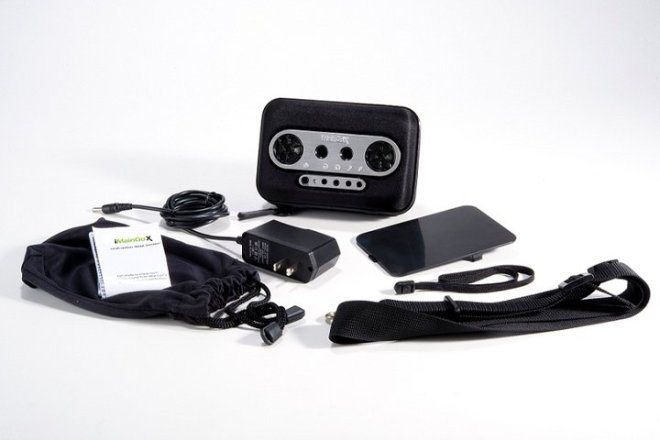 The iMainGo X case is chunky,  it is about 2″  thick so sits nicely between my thumb and forefinger of both hands cupped in front of me.  I find with my arms closer in to my body this reduces shakiness and my thumbs are free then to work half the screen each. 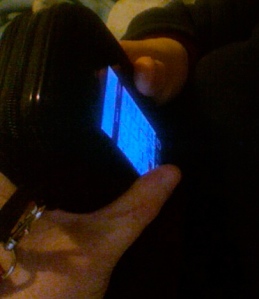 It also adds a little weight to your hands and after a week of daily practice,  I was able to reduce the button size when using Proloquo2go so I can now manage 4 x 4 on screen.

I also find the Tikinotes app easier to use for texting without having to get Bluetooth keyboard out to send a SMS.  Its only got out now if someone texts me whilst iPhone is on charge (out of case)  or when I am doing a lot of setting up new pages on Proloquo2go as only the standard iPhone keyboard is available in ‘edit mode’.  Even with iPhone in case and thumbs steadier a full qwerty keyboard fitted into that tiny screen space is a little too small.

I have managed using pogo stylus in mouth but as its not very long you have to hold the screen quite close up to your face, I am considering getting a mouthstick as it would also be handy for when my hands are really painful for typing on computer also and I still think I’d be quicker with one of those than headmouse or scanning/switches system. Its also much cheaper around £45 for a mouthstick compared with £250 for scanning program and £700-£900 for an headmouse!  I could also use it to maintain my hobby of water colour painting.

As drawing gets more difficult I’m also considering teaching myself to do finer detail work with a mouthstick and just use arms for larger background washes.

A mouthstick, with aluminium foil on the tip and copper wire wound up the shaft.

A guy called David Wallace came up with this adaption for his iPod Touch.  He discovered that copper wiring conducts those electrical impulses that come from human skin.  He took a mouthstick and attached a Pogo Stylus to the tip, wrapped some copper wire around it so it’s touching the stylus, then had the other end of the copper wiring go along the mouthstick shaft all the way up to the mouthpiece.  Then when he’s holding the mouthstick his lips are touching the copper wiring which sends electrical impulses from his skin all the way down to the stylus which allows the iPod Touch to detect the stylus touching it.
With a scanning app also becoming available for the iPhone soon for emailing and SMS it is looking more and more accessible into the foreseeable future for those of us with fine motor challenges!